By Trish Posted in - Uncategorized on January 30th, 2015 0 Comments

In December, In Tandem Arts director Trish Denton had a unique opportunity to meet with leadership in the performing arts from various cultural organizations in Detroit, Michigan. Hosted by Sandy Duncan, the former president of the Detroit Music Hall , Denton had the privilege of meeting with leadership from the Detroit Music Hall, Michigan Opera Theater, The Detroit Symphony Orchestra and Broadway in Detroit, as well as attending auditions for a new Broadway-bound musical and a production of ‘Wicked’ at the Detroit Opera House. 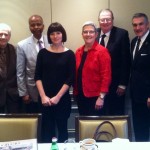